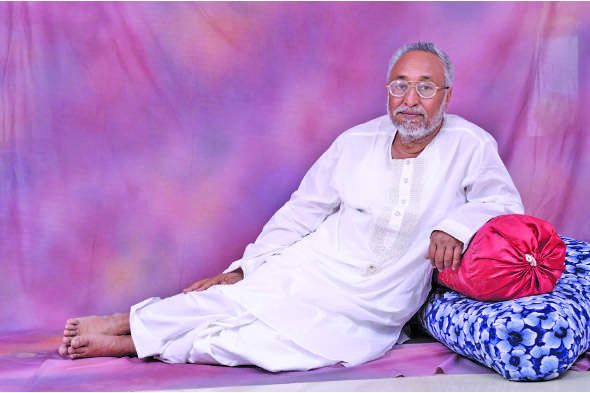 The guru of love

The guru of love
Gems of wisdom emerge from the ocean of spirituality as the epitome of love and service, Guruji Shri Gorji, speaks to Anuradha Sahu

Born in Khareda, a small village near Morbi in Gujarat, Shri Gorji was a brilliant student and wanted to pursue medicine, but his dream of becoming a doctor was diverted to graduating in commerce, given the financial constraints of the family. His passion for chess won him many prizes. On the professional front, he worked for 10 years in the postal services. As he progressed further with his sadhana, he not only took voluntary retirement on the completion of a decade but also declined to accept the pension.

Having a keen interest in spirituality, he loved reading up on the subject as much as possible, at times, even when pillion-riding on a friend’s bike. The works of J Krishnamurti attracted him a lot. Eventually, spiritual practices became a part of his life. Once, while travelling to South India, Shri Gorji visited the ashram of Sri Ramana Maharshi, at the foot of Arunachala hill, Tiruvannamalai, Tamil Nadu.

The power of the sacred place touched him greatly, and Shri Gorji experienced deep reverence for Sri Ramana Maharshi. He read the teachings of the seer, and eventually, Sri Ramana became his guru. He performed his sadhana in accordance with Sri Ramana’s philosophy and delved deeper into his spiritual practices.

After converting his house into an ashram, Shri Gorji opened another ashram, naming it Sri Ramana Maharshi Meditation Centre and is known to spend most of his time there spreading spiritual knowledge and serving the underprivileged and needy of the society. Shri Gorji’s main disciple is ‘Aaima’ (Kusum behen), his life partner, a devout and blessed person who helps and supports him on the spiritual journey.

Notwithstanding the recent cataract operation that had brought him to Rajkot from Morbi, Shri Gorji agreed to share his thoughts on spirituality with the readers of Life Positive, a magazine he is very fond of and has been reading regularly for the past many years. In the course of the interview, during the many telecons, emails, and video chats, Shri Gorji, very patiently, lovingly, and assuredly shed light on various relevant points.   “Life Positive is doing very good work,” said the spiritual mentor as we began the interview.

What inspired you towards spirituality?

Spiritual awakening is an emotional process, and so there must be emotional frictions. I was fortunate to have and to understand this at an early age. The broken heart has many treasures.

Please tell us about your guru and mentor.

In connection with the guru, we cannot use the past tense. Inner guru pulls and outer guru pushes. Sri Ramana Maharshi is my guru. Ramana Maharshi left his body in 1950 and I was born in 1958, so I was not fortunate enough to see him in the physical form.

At that point in time, i.e. in the 90s and the early years of the 21st century, I frequently visited Sri Ramana Ashram, but nowadays, I do not visit it so often.

It is said that remembering Arunachala is enough for liberation, and in true love, there can be no separation. Ramana is Arunachala, and Arunachala is Ramana.

Tell us something about Sri Ramana Maharshi.

Sri Ramana Maharshi was born in South India, and when he was 16, he had a ‘death-experience’ of the spirit transcending the body, where he became aware of a force which he recognised as his true Self. This experience of the deathless spirit led to his Self-realisation. After some time, he left home and went to Arunachala and lived there until his death. Paul Brunton’s famous book, A Search in Secret India, introduced Sri Ramana Maharshi to the West, and seekers from all over the world came to visit him. Sri Ramana rarely spoke and gave short answers to questions asked, but the silence felt in his presence was so magnetic that all present felt deep calmness. Even today, people from the world over come to Sri Ramana Ashram and meditate in the old hall, where Sri Ramana Maharshi lived.

How do you integrate ancient and modern philosophy?

In essence, they both tell the same thing. I just simplify them so that people can understand them easily.

The word love is used very liberally today. What is true love?

Love becomes perfect only when it transcends itself. The essence of love is to be in love. You will be surprised, but it is true that charity destroys love. Love is the characteristic of BEING while charity is concerned with doing. Charity means you are claiming YOUR love but, actually love flows only when you claim nothing. Love is not a thing to be achieved or to be given to others, but when your ego is no more, love naturally emerges.

Power corrupts, and absolute power corrupts absolutely. So, when you are not seeking any power, you are in the land of love. It is the art of having everything and belonging to nothing.

How were your growing-up years? Can you share something that made a deep impact on you?

My parents and grandparents were simple and spiritually inclined, including my teachers in school and college, both which I consider my good fortune.  When I was 12 years of age, I lost my grandfather and this had an intense impact on me as I was very connected to him.

Do you follow any particular path or spiritual practice?

As per Ramana Maharshi’s instructions, I follow the path of self-inquiry, that is, asking “Who am I?” It is the core of each and every technique and a very direct method. It is like shedding the leaves. It is not a mantra to repeat, but if someone feels so, it can be used as a mantra also.

In this method, you have to witness and be aloof of the present thoughts, whatever they may be. If you fall asleep during this inquiry, you should restart as soon as you awake. You can do this sadhana even while performing your worldly duties if you are sincere enough.

Sri Ramana Maharshi’s impact on my life was so profound that words are inadequate. But I always trusted his words, and in some years, his teachings changed the basic dilemma of my life. I felt a deep silence was always within me irrespective of outer circumstances. It is said that Arunachala is the most silent place in the universe and it is not untrue. I advise everybody to visit the Ashram and Arunachala at least once.

What are the techniques of your students’ spiritual practices?

Real spirituality begins when it transcends all spiritual practices. Generally speaking, we activate the King Chakra (Heart Chakra) if the student is ready. If the student is weak or of aberrant behaviour in body and mind, we give some mantra to recite or advise some breathing exercises. Sadhana is not a sadhana if not done at the proper time and place and with the proper people. Satsang is important.

What do you think is the first and foremost quality necessary in a sadhak?

Patience. Without patience, you gain nothing.

What is meditation according to you?

When you know love, you will know meditation also. All other techniques are preparation.

What is karma? Can we change our karma?

Jealousy, lust, miserliness, passion, hate, etc., are called ‘aadhi’ (feelings that take control over you) and produce physical ailments which are called ‘vyadhi.’ Our ego always becomes something and that is called ‘upadhi.’ These three produce karma and thereby its fruits.

What is the cause of suffering? Is karma responsible?

What is wrong in suffering if it is not associated with self-guilt? A mother cares for her children but there is no self-guilt, so the suffering does not feel like a suffering; instead, it is a pleasure. It is similar to what Shaheed Bhagat Singh felt for his motherland, Mother India, or Swami Vivekananda felt for the Hindu religion. Voluntary suffering is necessary for the evolution of the soul. Suffering is a fact. Why it is so, no one can tell. Just face it, do not avoid it, and it will naturally transform into bliss.

If we consider the theory of karma absolutely true, then there will be no place for God and devotion. In Hinduism, the  theory of karma and hypothesis of God, both are accepted because both are very useful theories.

What is faith? Can faith alleviate suffering?

Belief in religious scriptures is called faith in general terms. Most of the time, faith is carried over from one generation to the next generation, and gradually, it becomes mechanical. Such, mechanical faith is weakness, and we can observe around us many examples of such faith.

When religious belief is associated with passion, it becomes emotional faith. As emotions are blind by nature, such faith is also blind, and it becomes slavery. Such faith enslaves us and the people around us. When a living guru puts his energy in us, then by the grace of the guru, faith is born. This is called conscious faith. Such conscious faith is strength. Swami Vivekananda is an example of such faith. Such faith can move mountains.

Conscious faith may help to understand suffering, and such understanding may overcome suffering. Sometimes emotional faith also suspends suffering for some time, but it re-emerges at some other time. Mechanical faith makes us inert to suffering and thus we do not feel the suffering for some time. It is like a painkiller. Conscious faith develops intelligence and the power of discrimination, which lead us to enlightenment. Real faith gives peace. Emotional faith increases doubts and mechanical faith blinds our intelligence.

Celestial influences control our lives more than we can imagine. All the important events on earth are ordained by planetary influences.

This current century is said to be the initial phase of Kaliyug. What lies ahead?

What is the way to lead a disciplined and focused life?

If we live by inner intuition, life will be simple. Natural tenderness flows. Then you have no need for outer discipline or focussing.

How can one find out the purpose of one’s life?

It is a constant process. If somebody fully finds the purpose of one’s life, one is already dead. If we are alive, there is always some purpose to be fulfilled. It is unknown and will remain unknown. If the known does not interfere, we will understand what to do at that point in time. TO UNDERSTAND is important. Any fool can KNOW.

Do men and women share the same eligibility with regard to liberation?

No. Women are more eligible. Some spiritual practices are more comfortable for men because they are developed by men, but that doesn’t mean that liberation is easier for men. From ancient times, some sects even believed that only women can be liberated.

Is knowledge of scriptures absolutely necessary for liberation?

All spiritual practices are meant to help one travel from the head to the heart.
So, real SATSANG is more useful than the knowledge of scriptures.

Is there a common purpose of our human life?

Yes! To find out the common purpose is the purpose of our human life.

Be generous and forgiving in nature, and life will be happy. Let the life force drive you. Do not fear. You are not poor. You are perfect. Be calm. Be silent. Live in the present and accept pleasantly the harsh lessons that life gives you. God is merciful.