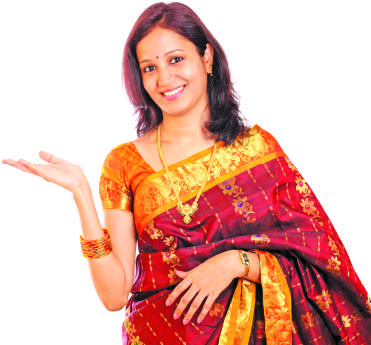 The making of a diva

The making of a diva
After a harrowing attempt at beautifying herself at a salon, Vidya Muralidhar discovers that true beauty is much more than facials and lipsticks

I gazed at my reflection in the mirror and let the vision from the eye that was open fall upon the kohl-lined one that was shut. The blue-grey shades of the eye shadow shimmered lightly on the canvas of my eyelid, bordered by the thick black line of the eyeliner. “Nice. Someday, I will learn the art of creating the smoky-eye effect, but for today, this will do.” With both eyes open now, I let my gaze wander over the rest of my face. Features had been accentuated, blemishes hidden. The array of make-up products I had used had done their job. All I needed to do was fill in the luscious matte shade of burgundy on my lips; ‘Diva’—an apt title for the lipstick I had chosen. As I looked into the mirror one last time, I certainly felt like one. Though, I must admit, I did not always embody this essence of being a diva. Discovering this essence has been a journey.

The art of make-up was one I had begun to dabble in only recently; until then, I had been averse to the idea. The wisdom of the forties had illumined to me the fact that the rebellious attitude towards make-up and fashion that I had harboured earlier was a defence mechanism I had come up with to protect myself. Let me tell you the story of how that happened.

Fair and lovely
You see, I am dark-skinned and very short, and there was a time in the crazy teenage years when I stopped seeing myself as the bubbly loving spirit that I was and instead wondered if someone with a flawed complexion and as scrawny as me could be considered attractive. It seemed unfair that while my growth spurt spanned a mere inch, everyone else towered  over me. And in a country where fair skin is considered the epitome of beauty, it hurt to be dark. My family and friends loved me unconditionally and cherished my presence. Not once did they make me feel less worthy. Yet, the conventional idea of beauty laid out by society had wiggled its way into my mind. While MJ crooned “It don’t matter if you are black or white,” to a young naïve teenager trying to fit in, it certainly did.

On one of those days, in a desperate attempt to change at least a tad bit of my appearance, I walked into a salon, also known as a ‘beauty parlour’ in my country. I had never been to one before. Now I would say that the name is a misnomer; there is so much more to beauty than looks. But at that point in time, I felt that it is the external fixing done to a person’s appearance that miraculously enhances beauty.

The ‘beauty parlour’ was a home-run salon owned by a matronly heavyset woman who had a couple of giggly and chirpy girls to help her. It is a norm in my country, where every grown-up person in your life is referred to as ‘aunty’ or ‘uncle’ and many a young girl as ‘baby.’ Aunty was perched in a cushioned chair with her feet resting on a little black stool, reading a magazine, while one of the helper girls was massaging her head. Her raspy voice boomed as she peered above her wide-rimmed spectacles at me.

I looked around the dingy, rectangular room with a makeshift changing area in the corner, a huge mirror, and three rotating chairs in front of it. There was a massage table against the wall at the far end of the room, across the span of which wafted a waxy aroma. A little cauldron-shaped pot rested on a ledge by the table. J K Rowling had not invented Hogwarts yet; or else the scenario would be akin to a young Harry Potter walking into Dumbledore’s office, wishing to learn a spell that magically transformed one’s appearance.

“Yes,” I replied, and proceeded to do as she said. I changed into a faded cotton gown she provided and lay down on the table, shutting my eyes tight. As she scurried around for the next few moments getting products ready to apply on my face, I waited agitated and uneasy.

Auntyji wore her glasses and scrutinised my face closely.

I shut my eyes, clenched my fists, and held on. If I wanted to feel beautiful, I would have to endure these experiences. While her stooges watched, she deftly massaged my skin with what seemed to be layers of masks, rubbing them in, letting them dry, and peeling them out. Next, I was asked to hold my face over a pot of steaming water, with a cloth covering my head, so as not to let the steam escape. It felt like my face was on fire. As the droplets condensed and dripped down my face, I consoled myself, “Don’t things always seem worse before they get better? The sting from the steam would open up my pores and rejuvenate my skin, making me glow just like those models in TV ads.” As the steaming ordeal ended, Aunty asked me to lay back and brought a couple of sharp needle-like instruments. Terrified, I asked her what she was about to do next.

“Not to worry. I must take out the blackheads, no?”

As she pinched and tugged away at the blackheads on my nose, I felt excruciating pain. Tears welled up in my eyes. I’m not sure if I had felt such animosity towards anyone before, but in that moment, I did, and as she brought the tweezers to my nose once more, I gathered every ounce of fierceness in my body and raised my hand to slap her. I just wanted the pain to stop. She was quick to react and with her large, jiggly arms, she firmly caught my hand and pinned me down. The stooges giggled.

“Arre! Baby, this much also you cannot bear? You want to be pretty or not? Then these blackheads, I have to take out. It does not look nice, no?”

I lay there, stark naked in my vulnerability, desperate to wedge my way into the land of the glamorous, my mind spinning, thinking in desperation, “It does not look nice? To whom? To another who was looking at me? I had to go through all this pain so that when someone else saw me, it would be a pleasing sight for them? So unfair! Were there not enough puppies, daffodils, and roses for the world to feast their eyes on if they wanted to see something nice?”

“Baby, you have to come back next month to remove the blackheads, OK? Otherwise, no use. It will come back.”

“Huh? Whaaaat? I would have to go through this again? And again!”

A rebel is born
I looked at myself for a few minutes every morning and night, and though the image was not perfect, there were certainly less painful things I could do with my time, like reading a book. It was true that I had wanted to fit into a mould that society had carved. Yet, even after the facial, even after the coaxing and cajoling of the skin, I didn’t feel any different. Maybe my skin glowed and there were fewer blackheads, but otherwise, I was the same person as I was before this experience. That’s when the rebel was born. There was a quiet defiance, a current of seething anger in my heart for rules that defined beauty in society. I decided that I would stay away from everything that changed my appearance externally, that the beauty industry was an ostensible one. Looking good did not always translate into feeling good. I had experienced that, though I could not fathom what I must do to find my inner glow.

Years passed. Fortunately, for me, my husband cherished a sense of humour more than a sense of style, and I did not care to change. I was most comfortable in slacks and (to his chagrin) his T-shirts, and he just let me be. When the kids came along, for the longest time, I wore their presence as my accessory. Their spirit was an extension of mine, and I basked in it. I felt radiant. I was wrong to think that motherhood is what makes one beautiful. I did not own our children, and a time comes, as it did for me, for them to leave your space and find their own. Being a mother is just a role I played.

Fearlessly me
I began to fill in the void the kids left, with questions: Who am I? Why am I here? What does taking care of oneself truly mean? There were other burning questions too about faith, culture, and values....... The search led me to meditation. Though none of the answers appeared magically, there was a subtle change in the way I responded to life. It took months, and nothing changed externally, but I was happy for no particular reason. My heart felt warm and fuzzy most of the time.

One night, as I brushed my teeth, I looked in the mirror. I was still short, still dark, and to add to it, the ageing effect of midlife hormones was conspicuous—streaks of grey, thinning hair, and the battle of the midriff bulge. Yet, I was ecstatic. That warm fuzzy feeling had eclipsed all insecurities. I had brushed away layers of inadequacy just as valiantly as I had brushed away the plaque. I was in my forties now, and I loved, lived, and wrote from the heart. Nothing else mattered. Maybe, this is what it felt to be a diva. To be fearlessly you.

And that, in short, is my journey to finding true beauty.

However, this awakening hasn’t broadened my sense of style. I still lounge around in my sweatpants and hubby’s Superman T-shirt, but I am no longer averse to the idea of dolling up on occasions. Today, I was getting dressed to do an author event. The excitement of doing something that I love, combined with a dash of make-up, made me feel yummy.

As I turned around to step out of the room, my faithful little puppy wagged his furry tail at me. Ah! He approved. He knew that under the mask of the skin toner, primer, foundation, highlighter, and blush was the warm and funny spirit he loved.

I now know it too. I have finally learned to embrace myself just as I am. I am a quirky woman who graciously bore the pain of childbirth but is terrified of a pair of tweezers.