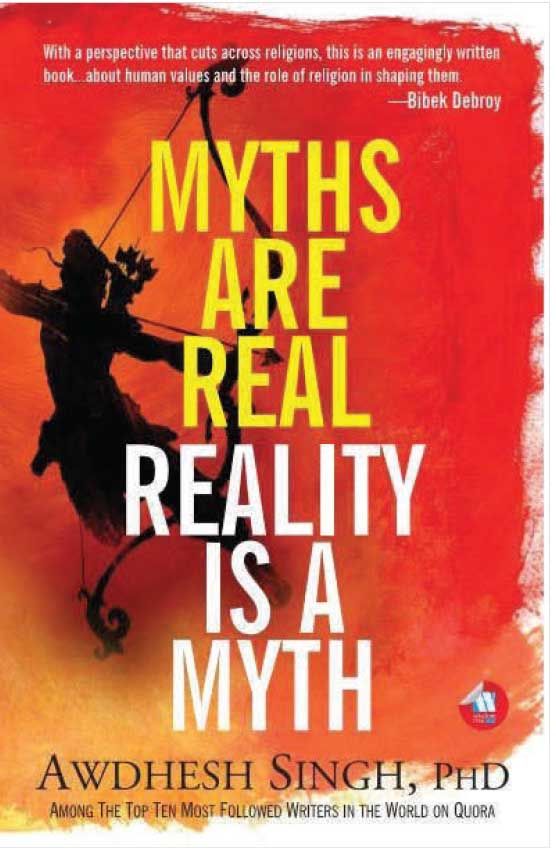 Living in this mortal world is not easy. Your troubles begin with the time you start getting taught, and imparted certain values by your parents, and later, by your teachers and surroundings. By the time you grow up, you are already moulded a certain way, expecting that life will give you a fair deal simply because you have been fed the right values.

But it doesn’t happen that way. Life seems to favour those whose values contradict yours. The good and the meek suffer, whereas the violent and cunning prosper, causing you to question the ways of the world and also of the Divine. The book, Myths are Real, Reality is a Myth, is a good attempt at trying to demystify how culture, religious indoctrinations, mythology, and a collective belief system affect the behaviour of man, regardless of whether they are based on facts or not.

What logic and common sense fail to achieve, instilling a fear of God in the masses, easily does. But instead of creating a harmonious and happy outcome, these attempts often unleash the very forces the society was aiming to subdue or eliminate. For instance, certain communities in the world are extremely non-violent by nature and will not resort to bloodshed even if badly provoked, because their religion or culture considers it sinful. Yet, when such a community is attacked by another community which sanctions violence in the name of God, it is unable to protect itself through non-violent means and gets annihilated, resulting in the dominance of brutal forces on the planet.

Similarly, men and women were strictly segregated by many societies to ensure fidelity and avoid unbridled licentiousness between the sexes. But as a result, the women got severely marginalised and short-changed for opportunities to grow and evolve. Consequently, the women revolted and began to share the workspace with men. The change in dynamics resulted in increased extra- and premarital affairs, and the moral fabric of the society got severely affected. The author provokes the reader to question his moral high-ground and consider the validity of contrarian views too while trying to decode the reason for his unhappiness.

The book compels the reader to objectively view and dissect his beliefs and dogmas, in order to find the truth for himself. Awadhesh Singh urges the reader to seek self-knowledge by passing his beliefs through the fire of experiment, before declaring anything as the gospel truth. Because the ultimate truth is not static but a living, pulsating, as well as a constantly changing and shifting reality. “The Tao that can be spoken is not the eternal Tao,” he quotes in the final chapter. Can anything be a greater indicator of the truth?