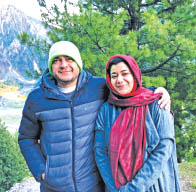 The pashmina warrior
Babar Afzal revives the dying craft of pashmina shawl-weaving in the conflict-ridden state of Kashmir and becomes an epitome of undying faith in the face of hardships, says Jamuna Rangachari

The land of Kashmir has become synonymous with conflict, unrest, and turmoil, and most of its beautiful offerings have either been forgotten or become obscure to the world.

However, there are still a few die-hard optimists who believe that the place can be restored to its lost glory, and peace and prosperity can prevail in the region. Babar Afzal is one such person. Babar is credited with reviving the dying craft of the pashmina shawl industry in Kashmir and the livelihood of hundreds of pashmina goat rearers. I met him at a conference where he showed me how Kashmir is a blend of beauty and creativity in various forms, of which pashmina shawls are a proud and integral part.

Babar left Kashmir in 1996 at the age of 20 as he did not want to stay in a place which was full of uncertainty and conflict. He studied hard, left the state for his first job and was extremely ‘successful’ by the standards of society. He worked with organisations like McKinsey (in India, USA, UK, and the Middle East) as a technology analyst, business consultant, and an ethical hacker who broke many codes. He had a great salary, great accommodation, good food, good friends, and was travelling all over the world. Yet, there was always something which was pulling him back home. His soul gnawed at him all the time. “I could see people back home, friends and family, who were struggling, who were dying. It was devastating,” he says. He had to revive the place that he loved.

The magic of pashmina beckons Babar
Babar had always understood and resonated with the power of pashmina. The word ‘pashmina’ comes from the Persian term ‘pashm,’ which means wool. The real pashmina wool comes from the Changthangi goats of the Himalayas. The goats are cultured in cold weather which compels them to develop protective skin and wool for survival. Babar knew that in the late 14th century, poet and scholar Mir Sayyid Ali Hamadani had introduced the Himalayan goat’s wool to Kashmir. Hamadani had developed a weaving industry in Kashmir thanks to these goats. Babar wanted to work in the same area. “My love for pashmina comes from a journey that is woven with different threads. Of the community that has protected the pashmina goat for centuries. Of a textile so pure that it rests atop everything the world considers luxury. Of a place that is being hit by the severe impact of climate change. Of a state that is known mostly for disturbances and terrorism. It’s about my own journey of quitting a corporate career and taking on a mission to guard the roots of the ecosystem and protect the perfection that is pashmina. And in the process, give back as much to the community that has selflessly given us the finest fabric known to man.”

Babar saw that the goats responsible for the pashmina industry were dying due to changes in the ecosystem, making the industry struggle for survival. He knew he needed to do something about this, else the industry itself would become a faint memory. Apart from its beauty, he also knew it had, and still has, tremendous economic potential. Essentially, he wished to find an economic solution for communities linked to the pashmina industry in India, the country’s original and perhaps only true luxury product. Today, India accounts for less than one per cent of the world’s annual pashmina production, which is estimated at 10,000 to 15,000 tons. That’s far behind China with 70 per cent, and Mongolia with 20 per cent. He could not allow this to continue.

A rare bond with shepherds
Before he implemented his entrepreneurial solutions, Babar became a shepherd to empathise with the hardships of the community he had vowed to protect. In the process, he learnt many lessons. “I got to know that a flock of pashmina goats was attacked by a snow leopard in a village on the outskirts of Leh. This was in the late afternoon, and the spot of the incident was about 60–70 kilometres from where I was. Once I reached the spot, it was about a 1.5 mile hike to the place of the attack. As it was getting dark, I started to run with only a Swiss knife in my pocket to ward off the leopard.” His choice of weapon was not as big a blunder as running at 14,000 ft. was. Soon, he started gasping and fell down unconscious.

This was a terrible situation, but Babar survived because the shepherds came to his rescue. They lost their flock that day but saved him from certain death.

Many could have given up on their resolve after facing such difficulty and gone back to their comfort zone, but not Babar. When he woke up the next day in a hospital, his resolve to resuscitate the livelihood of the pashmina shepherds who had saved his life, only increased. He wished to revive the pashmina industry and improve the lives of shepherds who lived in difficult terrains. He owed his life to them.

Sustainable ecosystems
Babar’s efforts resulted in the founding of the Pashmina Goat Program. “It is not just about a product. It is about one million people whose lives are directly and intricately linked to this incredible weave. And that is what the Pashmina Goat Program is trying to highlight,” Babar says. He has also used technology to change the dynamics by introducing an e-commerce system, testing and certification of the pashmina, plus instant weather alerts delivered to the smartphones of herders and nomads. “It has certainly been an incredibly tough journey. But it’s all been worth it,” he says with a smile.

His dream now is to build the largest global sustainable pashmina enterprise on the planet which is co-owned by the community. He wishes to build impact projects and an authentic pashmina ecosystem in the Himalayas for the welfare of pashmina traders and rearers. He also plans to create collaborations around the world for technological interventions that can democratise the whole process.

As a dreamer, he also wishes to build global corridors for research, trade, design, impact, culture, and art exchange between India and other countries to change the future of over a million people at the bottom of the pashmina ecosystem.

On the silver screen
The film The Call of Pashmina made by Emaho Films and sponsored by Jnana Foundation is a documentation of his exemplary work. It shows him as a ‘silent crusader’ who has built a beautiful case for the authentic pashmina industry of Jammu and Kashmir globally.  Through his work, he has successfully highlighted the lives of nomads, shepherds, weavers, craftsmen, and women associated with the trade.

The documentary has been screened at international documentary film festivals in India and abroad through official selections and has won multiple international awards.  A ‘positive story’ from the militancy-ravaged Jammu and Kashmir which is inspiring the world. It is being screened in different parts of the world at a time when Bollywood films on real-life characters are hitting the screens and doing tremendously well.

Spiritual connection
God shows his magic to those who believe in Him.

Apart from his grit, Babar’s other great strength is his wife. He has known her since his school days and married her soon after he got his first job. She has been with him all through the ups and downs of life, which is why he considers her a spiritual soulmate.

“The world shows its magic to those who pursue their dreams,” Babar exclaims.

Babar has shown me through his own life, how life is indeed a colourful tapestry, much like the beautiful pashmina shawl, always full of hope and magic.