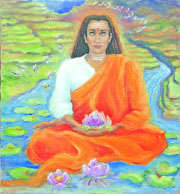 The road less travelled
Ketaki Jayakar recounts her enchanting and eventful journey to the holy Himalayas, which she accomplished by the grace of Mahavatar Babaji

Unless Mahavatar Babaji wills it, one cannot walk on the road less travelled. (Mahavatar Babaji has been introduced to readers by Paramhansa Yogananda in his Autobiography of a Yogi).

Yogi Amarnath, a qualified architect from South Bombay, living across the Raj Bhavan at Walkeshwar, left his flourishing practice and went to the Himalayas. He lived in Muddhedh, Himachal Pradesh, which is in no man’s land, high in the mountains, with only the wild animals and leeches for company. Living in a kutiya (hut) for about ten years and meditating in a nearby cave, he subsisted on meagre food brought to him by the villagers.

I had met him socially, and since we have the same guru, Mahavatar Babaji, I attended his lectures. This March, Yogi Amarnath rang me up and said that he was taking a group to Himachal Pradesh to Mahavatar Babaji’s Ashram at Palampur, near Dharamshala. I promptly registered my name.

The ashram (hermitage) where we lived was founded by Yogi Amar Jyoti, a direct disciple of Mahavatar Babaji. We were lucky to meet him at the Delhi airport, and he accompanied us to the ashram. One cannot tell his age. Most of the time, he lives in a cave in Kashmir, high up in the mountains, behind a curtain of waterfall, hidden away from the world. He is indeed a modern Himalayan master, who drives an SUV and travels ‘astraly’ as well!

The ashram is managed by a sadhak (seeker), Sadhana Didi, who single-handedly manages the ashram administration. She comes out of the residential quarters into the yagna shala, only after 5.00 p.m., that too to perform the daily havan (ritual offering to fire), and then retreats into her quarters. She observes maun (silence) and carries out her sadhana (spiritual practice). Again, one cannot fathom her age. Dressed in white flowing robes, she looks like an angel who just glides in and out of our sight. However, we had the good fortune of interacting with her on the day we performed our group havan. She told us that she has been in the ashram since its inception a few years ago. The only thing she said was that she was lucky to be born in India in the land of rishis (sages), who gave us such wonderful scriptures.

The guest house (DARPAN) accommodating the visitors is across the ashram, at a stone’s throw, with just a little vale between the two buildings. So, to reach the ashram, one has to walk round the wicket, climb the hill, and then reach the ashram. On the spiritual path, there are no shortcuts.

Our day began at 6.00 a.m. with a yoga class, a lecture by Yogi Amarnath, and then breakfast, after which we left for the ashram across. The knowledge gained at the feet of the Master is something which each one has to personally seek.

Excursion with seeker friends
We were wonderful group of seekers 27 in number, all trying to help each other. I was alone by myself, but not for a moment did I feel lonely. We had a couple who were yoga instructors and their twenty-plus son, who was the backbone of the group. One Dr Dev, who is researching in biofield, i.e., the study of auras, was also present. He had with him a small apparatus, like a speedometer with a needle, which detects any paranormal activity (it reminded me of a pocket transistor). We had in our group, Ajit Kadkade, the classically-trained famous singer, who regaled us with his internationally famous bhajans (devotional songs) throughout our journey. Real celebrities are indeed the epitome of humility. The Masters, of course, were important, and we had all gone there to drink from the well of their knowledge.

After having rested ourselves, we went to see the Parashar lake, named after Parashara Rishi, who was the father of Ved Vyas. He had meditated near this lake thousands of years ago. The lake is at a height of about 10,000 feet above sea level. It was only because the Master’s grace that I was able to reach the lake. At that height, the air is very rare. It was cold, and it had started drizzling. But it was a once in a lifetime experience! The lake is a size smaller than the Oval Maidan (in South Mumbai), and there is a small floating island in it. The island keeps on rotating as well as moving around in the lake. There is a small temple dedicated to Parashara Rishi. Outside the temple and facing the lake, there is a long platform where we all sat for meditation. I am unable to express the emotions felt at this place which is so charged with the energy of thousands of rishis who have done tapasya (meditation) here. It took us a full day for this trip.

Group meditation
The next excursion was to see the kutiya where our dear Yogi Amarnath had stayed for about ten years and done his sadhana. Here, the group energy was evident. I travel with tour companies along with people who are so engrossed in selfies and themselves that I considered it a blessing to be with such simple people who were spiritually so evolved. One young man carried my backpack, a young beautiful woman who is a famous actress (of which I was so ignorant) held my hand throughout the climb, and another young woman waited for me at very short intervals. I cannot even climb up the High Court floors, and here I was, climbing up to those giddy heights! The trees were tall, and a small little brook rapidly sped by on one side.

From a well-appointed apartment at Walkeshwar, this yogi stayed in this kutiya, deep in the jungle, meditating in a cave which is now closed. There is a small Ganesh temple where we performed aarti (worship) and then meditated in batches in different sections of the Ganesh temple, a Saraswati temple, and at the Samadhi of GhataTopiya Baba (the endearing nomenclature given to a sanyasi by the local folks). There is a sanyasi (ascetic) living there as its caretaker who welcomed us with cool aam panna (mango sherbet). He also gave us panchmukhi rudraksha (holy beads) as prasad (offering) from the place. He showed us medicinal trees, especially those of camphor, leaves for diabetes, and bay leaves.

Intense energy field
The climb downward was much easier. We had to climb another mountain to reach the cave of Kudh Mahadev. The climb was as bad as the previous one, but Mahavatar Babaji took me there too. The cave was something like the computer-generated pictures one sees on TV and in films. We had to wear the head torch which miners wear because we had to keep both our hands free to hold on to the walls. Inside the cave, there were thousands of Shivlings (symbol of Lord Shiva) on the ground, on the walls, and on the ceiling. There was a huge formation of Shesh Naag (serpent god) hanging from the ceiling. Yogi Amarnath was inside the cave to show us everything. He told us that it was one of the energy fields of the world where foreign scientists have conducted research and come to this conclusion. Dr Dev, who was carrying his little metre with him, recorded 26 electrical points. Such a high level of energy was found even though there was no electricity whatsoever in the nearby villages. Seeing is believing! I had the good fortune to visit Stonehenge in England recently, which too boasts of an ancient energy field, but this cave is on a different dimension. After coming out of the cave, our whole group sat for meditation in the charged environment. One cannot describe in words the joy experienced in that rarefied atmosphere.

After climbing down the mountain, we visited the temple of Swayambhu Shivling. It had been a long day, and my old legs were complaining a bit. We returned home to the comfort of moong dal khichdi and kadhi (staple Indian fare) in the warm precincts of the ashram quarters. The outings were over, and the rest of the stay was filled with lectures, meditations, and evening havan in the ashram yagna shala, followed by divine bhajans by our very own Ajit Kadkade.

By the time we returned, my legs had started aching, and I was exhausted due to the intense dry heat in the mountains. I did not have the strength to even climb the few steps into the aircraft. At the Mumbai airport, we landed earlier and were required to walk through the aerobridge to the Baggage Claim Hall which is miles away. I uttered a silent prayer to Babaji to help me in this last lap of my journey. Can you imagine! The aerobridge was out of order and the airlines sent us a bus which dropped us just outside the Baggage Claim Hall. Ask and you shall receive. All your legitimate needs are met!

A pre-booked taxi was waiting for us, and I returned home safely by the grace of the Master.