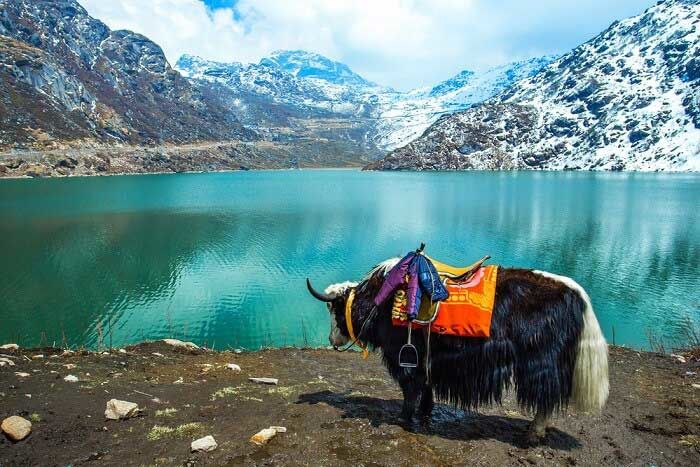 The writer travels off the beaten track to explore the unique spiritual and cultural heritage of Sikkim and experiences a divinely enriched holiday.

Sikkim, once a small independent kingdom, abolished monarchy in the year 1975 to merge with India after a decisive referendum, thus becoming the 22nd Indian state. Renowned for its natural beauty and spiritual foundation, this Himalayan state is a famous tourist destination.

Sikkim shares its borders with West Bengal in India as well as countries like Nepal, Bhutan, and China. The state is famous for its cascading waterfalls, Buddhist monasteries and gigantic botanical gardens, along with its rich cultural and spiritual heritage. This little corner of the North-East has the magnificent Teesta river skirting its borders, carving out ravines and gorges, while meandering through the hills.

The Buddhist monasteries weave a culture of purity, tranquillity, and a quest for enlightenment within the state. The famous Rumtek monastery, situated a little above the city of Gangtok, has played a key role in forming the spiritual heritage of Sikkim.

Travelers, on a journey to Sikkim, discover a mystical wonderland of spectacular natural beauty. The panorama of the snow-capped Himalayas, beautiful meadows with colourful flowers, the vibrant culture, and a population comprising both Sikkimese and Tibetans, make up the kaleidoscope that is Sikkim—a holiday destination, both fascinating and challenging.

Having learnt thus, I set out for this divine and pious land, equipped with my travel bag and hiking-kit to help me survive the high altitude.

En route to Sikkim, I listened to James Blunt’s ‘1973’ playing on the radio as my taxi traversed through Bagdogra and the winding roads of Darjeeling. The zingy Wai-Wai snack added the perfect dash of flavour to my trip. In Sikkim, I put up at a comfortable army holiday home which was a welcoming place for visitors from all over the country. The highlight of my trip, which intensified my love for Sikkim, was the spectacular sight of all the stars, galaxies, constellations, and planets that I witnessed in the heavenly skies.

From the juicy burger at a local café to the Oriental music played at a restaurant—not to mention the rains that made the atmosphere a little more exotic—everything made it so liveable!

I was thrilled to see the shops selling Sikkimese silver jewellery and authentic daggers which lent a certain mysticism to the place.

The hills spoke silence which was echoed by the tunes of the Buddhist hymns being sung at the Rumtek monastery.

The famous Namchi Bazaar or Siddeswar Dhaam (as it is also known) has a huge statue of Lord Shiva or Kirateshwar Mahadev at Solophok hill and is considered to be a unique place of pilgrimage.

The bazaar is popular for its wide display of saleable items such as bags, watches, and clothes, mostly imported from neighbouring places. The other places worth a visit in Sikkim are its Western and Eastern parts, which showcase the beautiful Himalayan State in its full glory. The picturesque lakes surrounded by snow all year through, present a spectacular view.

The Nathula Pass is one of the three open trading border posts between India and China.  A lot of pilgrims flock to this region to trek the beautiful mountains and enjoy the scenic beauty of the valley.

The majestic Coronation Bridge, over the mighty river Teesta, was built by the British to celebrate the coronation of King George VI and Queen Elizabeth, and is the lifeline connecting Darjeeling, Siliguri, Jalpaiguri, and Bhutan. It is also known as Sevoke Bridge.

The Buddhist altars, the prayer wheels, the pigeon feeding grounds in Gangtok, and the Rumtek monastery, truly make Sikkim a visitor’s paradise—a place to live in and learn from. With my camera and quest for Buddhist nectar, I visited Rumtek and stayed there to observe the daily lives and basic practices of the Buddhist monks as well as their ways of meditation.

This was in itself a great learning. The simplicity of thought and the practice of Vipassana—the methodology of maintaining silence and quieting the thoughts through meditation to achieve a state of thoughtlessness—gave a whole new meaning to my life. This 12th century monastery, with layered golden curtains hanging on the sides, houses a big idol of the Buddha seated at the centre, depicting inner peace, tranquillity, and stillness.

An air of harmony permeates the monastery as the chanting of Buddhist sutras by the monks reverberates in the atmosphere. People from across the world visit Rumtek, to be one with the Buddha and experience inner calm.

The monastery also houses quarters for the monks where they can rest and have their meals. The entire landscape is scented with the divine fragrance of Buddhism. Inside the complex, one can see the villagers ploughing their fields, farming being their source of livelihood.

Worshipped as the remover of obstacles, idols of Lord Ganesha too are visible at many places. The locals believe that no other god can change their destiny.  Brightly coloured flags and water prayer wheels installed all over the town of Gangtok, magnetise many visitors from all over.  The big rice bowls from which people feed the pigeons are another interesting attraction.

The memory lingers on

Visiting the royal abode of yesteryear monarchs and various other interesting places gave my short trip to Sikkim the feel of a complete holiday.

The memories of hot coffee served along with Maggi noodles topped with vegetables (perhaps a delicacy of almost every known hill station in India) and the spicy Sikkimese meal thupka (noodle soup) stayed with me, as I fondly recalled the love with which they were prepared and served.

Having soaked in the bliss and joy of Sikkim with its pure air and pristine environment, I finally bid farewell to the mountain state and returned home.

The chilly winds of the region, the gushing waterfalls, the image of the Buddhist prayer wheels, and the scents of Rumtek monastery all stayed with me and infused my life with a new perspective.  The journey that I undertook to the North-East will be cherished by me forever.

Thanks to Heritage Getaways, which made my stay more memorable than I could have ever imagined.

Mode of transportation: 2 ½ hour flight from Delhi to Bagdogra (Darjeeling).

Drive from Bagdogra to Sikkim (Gangtok) (4 hours 18 minutes). For transportation within Sikkim, hire a local taxi for sightseeing.

Things to do while in Sikkim: Visit the Rumtek Monastery, Namchi Bazaar,