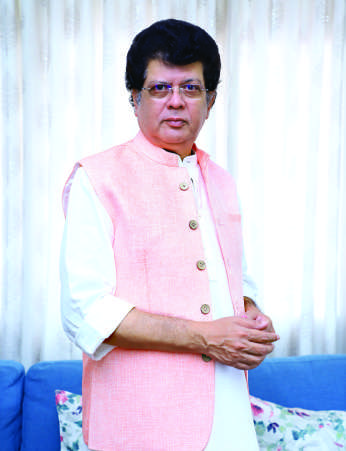 The Tao of living

The Tao of living
Mr Pradeep Pawar is a spiritual teacher from Kolhapur, Maharashtra, who holds workshops in the regional language on how to attract success, money, growth, and happiness, to help as many people as possible. He shares the story of his spiritual journey and his final merging with the Supreme

Now, looking back at the kaleidoscopic unfoldment of my life, I truly feel that the things I felt ‘I’ was doing were actually unfolding on their own.

I remember myself to be a very normal child in school. With the rigorous physical training that I received from my military school background, I was shaped to join the armed forces. I decided to pursue this after my schooling. But fate had other plans in store.

Acting beckons
College life opened new avenues for me, and I started exploring the hidden dimensions of my personality. It so happened that I was selected to play a role in a drama that was to be staged on our college annual day. Surprisingly, the drama, and especially my role, was so appreciated that I became popular in college overnight. Not only this, my friends and my teachers became so impressed with my performance that they started suggesting that I seriously take up acting as a career. Not that the idea of becoming an actor didn’t entice me, but I had envisioned to join the armed forces and was quite determined to do so. Thus, I humbly dusted off their suggestions.

Days passed by, things got back to normal, and the euphoria settled. And then one fine day, a few people came to the college looking for me. They were from a Marathi film production house and urged me to accompany them to their studio. At the studio, I was offered a film by the director, and to my astonishment, I was to play the lead role. I was flabbergasted. I had never imagined that such a small incident like playing a part in a college play might land me a role in a big scale Marathi film.

Permissions were sought from my parents and a new chapter in my life commenced.

After a few months, the film got completed and was released in a big way. Once again, I had been applauded for my performance, and I started getting new offers. In time, I got busy doing films, and my focus towards my dream to join the armed forces faded.

Coping in Mumbai
Since my horizon had started widening, I shifted from my native town Kolhapur to Mumbai. This big city, with its promises, was also a bed of thorns. It was very difficult for me to find a place to settle. And again, a miracle took place. I met a relative of mine who offered to share his apartment.

I got busy soon. Along with a few new assignments, I was also offered roles on stage.

Things went on. Mumbai didn’t turn out to be as promising as I had imagined. Though I had work, my earnings were meagre, the competition was fierce, and sustenance became a problem. I tried my best to cope up but couldn’t catch up with the pace.

In the meantime, my relative (who had given me shelter) got transferred, and I was on the streets—literally! I had no place to live, no money to hire a place, and ended up sleeping in pipes and on park benches. This was too much for me to endure, and I finally decided to go back home.

Blissful connectedness
As I was travelling back home, lost and depressed, suddenly, I had a mystical experience. Out of the blue, and for no particular reason, I started experiencing the emotion of joy bubbling in my consciousness, as if I had become a fountain of bliss. I was surprised at this outburst and just couldn’t contain it. I reached home in this state, and it went on increasing; I was transported to the realm of ecstasy. Before I could comprehend what was happening, I went into a semi-trance-like state which lasted for more than 15 days. In this state, I was just overflowing with joy and tears were rolling down my cheeks. Surprisingly, my depression and the feeling of resignation evaporated.

Though this state waned over a period of time, the essence of bliss and the sense of connectedness stayed with me.

Sharing the joy
My personality started undergoing a change, and I started becoming calmer. The constant need to prove myself reduced considerably. I became more accommodative, more empathetic, more aware, and more at peace with myself. These newly sprouted qualities made me a happier person, and this also influenced the day-to-day course of my life.

Then one day, I had an impulse where I felt like sharing my joy with others. I didn’t know how this was going to happen because it had no syllabus. But from nowhere, people started approaching me and inviting me for talks. One thing led to another, and in the course of time, I started becoming recognised as a life coach. And again, I experienced a new turn in the unfoldment of my life.

Years passed by, and an acumen awakened within me where I could explore the higher dimensions of existence. Concepts of Consciousness, Advaita Vedanta, Quantum Physics, Oneness, and Non-duality became a part of my understanding. My spiritual and pragmatic life seemed to be in perfect balance, and I was enjoying the fruits of this state. Everything in my life was unfolding as I wanted it to, and I felt like I had found the answers to my quests about life.

But what followed next was the pinnacle of my spiritual experience.

The final merging
I remember it was the 29th of August, 2004. Like any other day, I was sitting in my room post dinner. After some time, I thought of going to bed and got up from my chair. To my left, there was a big mirror on the wall. I looked in the mirror and there was a flash. I saw myself collapsing like a sand castle collapses in a gust of wind. In that moment, I experienced that the sense of my personal identity had just dissolved and there was no more ‘Me’ left. All that was left was ‘Presence’—’Beingness.’ Standing in front of the mirror, I had a sense of being without an autobiography. It was as if I had undergone a metamorphosis.

The ‘being’ slipped into bed and the one who woke up the next morning was limitless, infinite, and unbound consciousness.

‘Of’ the world and ‘Off’ the world
This changed the entire paradigm of my existence. Though I am forced to use the word ‘my’ and ‘me,’ the ‘me’ had completely dissolved. This state was an exact reflection of Kabir’s verses where he says, “Jab main tha tab Hari nahi, Ab Hari hai tho main nahi/Sab andhera mit gaya, Jab deepak dekha mahi. (When I existed, God didn’t, Now God exists and I don’t/The darkness has disappeared, I’ve seen the light.)

This was a life-transforming experience. Not that the mundane day-to-day life became anything out of the ordinary, but since I was no more bound by this form or the course of life, I experienced immense liberation. I was ‘of’ the world and ‘off’ the world at the same time.

The chatter of the mind didn’t cease, but its cacophony became distant and harmless. My being could constantly be in a state of equanimity. Life continued throwing challenges, but since there was no resistance from within or any attachment to the outcome, their intensity lessened considerably.

Besides this, synchronous moments became a part of my daily life, insights started surfacing, and a deep sense of clarity dawned.

Though my identity as a separate self had dissolved into the ocean of consciousness, the functional sense of ‘me’ had remained. This personal self was at the helm of everyday affairs but each and every impulse was arising from an infinite realm of consciousness. Now, life is flowing at its own pace, and I am drifting along with the current of life effortlessly.

This is the Tao of my living.