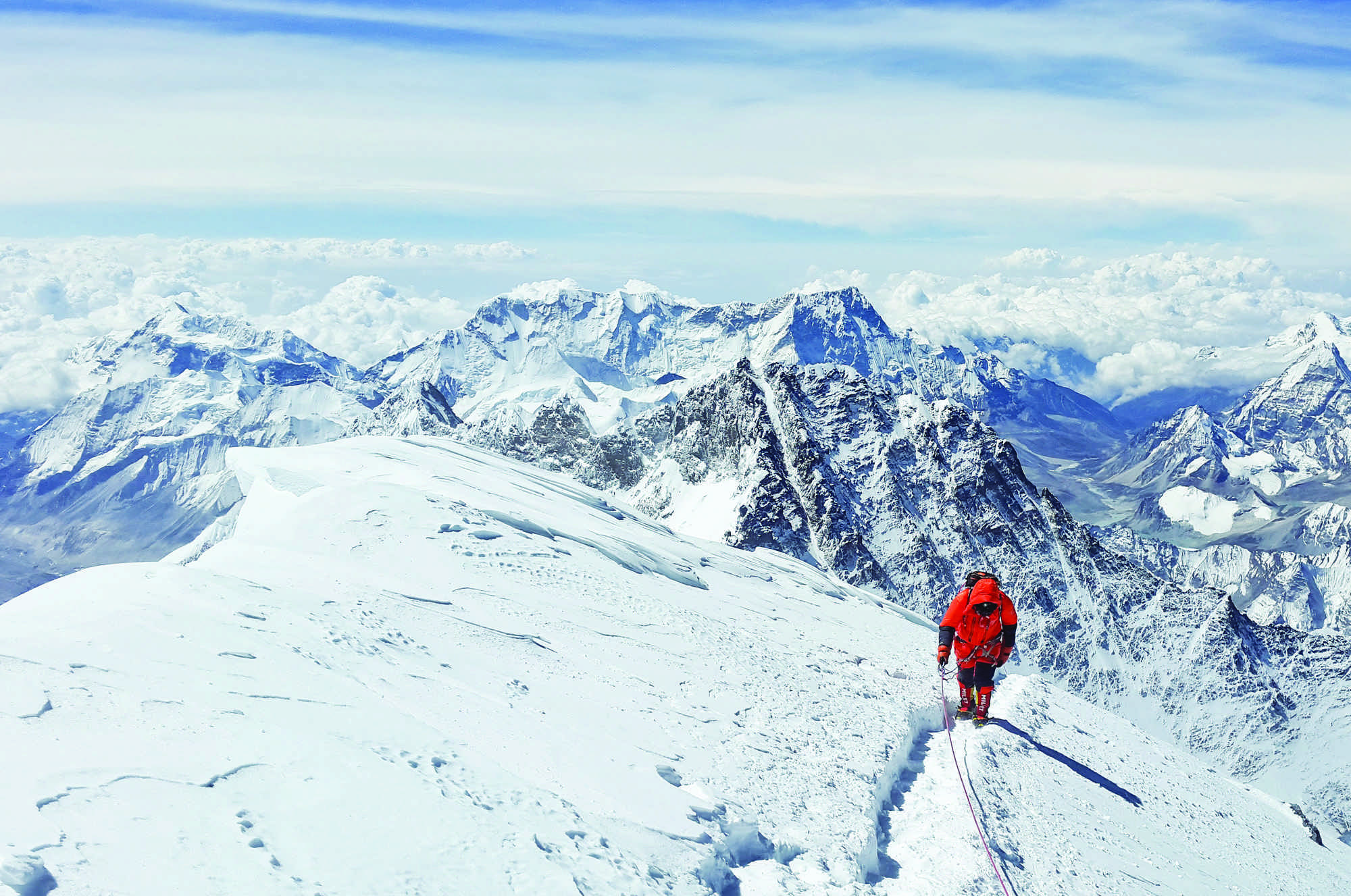 Software engineer-turned-vegan mountaineer, Kuntal A Joisher, talks about his passion for climbing and how it has made him a better person.

37-year-old Kuntal fondly recalls the day when, as a teenager, he watched the PBS Nova Everest documentary. He was fascinated by the mountain and believes that the seeds of love for mountaineering were sowed back then. “I didn’t even know something like mountaineering existed,” he says, adding that he was a regular child, happy in his world of friends and cricket. Images of the scary Khumbu icefall and the magnificent 3000-feet ice-wall of Lhotse face stayed with him.

It wasn’t until eight years ago that Kuntal’s love for the mountains was rekindled. He and his wife, Dipti, decided to take a vacation in Shimla. “We wanted to see snow,” he says. “However, six days passed by and there was no sign of snow. In the hope of finding snow, we made a trip to Narkanda—a quaint and scenic Himalayan hamlet—80 km from Shimla. The locals there told us that one usually found snow on Hatu peak, about 10 km away, and so, excited, we set forth. About half a kilometre into the drive, even before we reached Hatu peak, we ran into two feet of snow.” Kuntal recalls how Dipti and he felt like small kids in a candy store. They played in the snow to their hearts’ content, after which they decided to venture a little further. Another half hour later, they found themselves amidst giant coniferous trees against a panoramic view of the Himalayas.

When they finally reached Hatu peak, Kuntal experienced a watershed moment of sorts. “We quietly sat down and soaked in the beauty and grandeur of nature. In that moment, all the pondering over the past and worrying about the future melted away. I was truly alive to the present moment and clearly understood its importance. I could hear my own breath. So far, I had taken breathing—which is critical to living—for granted, but this was the first time I consciously inhaled and exhaled every breath. I could hear every single heartbeat.” Kuntal describes this as magical. “I was at peace with myself and felt eternal happiness—a state of mind that I had never experienced before.” In that moment, Kuntal decided to pursue this surreal but fully conscious state of mind for the rest of his life.

Lessons from the mountain

Few months down the line, he signed up for a trekking trip to the Everest base camp. Kuntal says, “After days of walking through spectacular Himalayan landscapes, we reached the Pumori base camp, which offers an amazing view of Mt. Everest. That was the first time I came face-to-face with Mt. Everest, and it was truly humbling. Towards evening, I witnessed the last light of dusk shining on the Everest. The other mountains had faded into the evening sky, but the Everest stood tall at 29,000 feet above sea level, a height at which commercial airliners cruise.” Kuntal goes on to describe this high point as so hostile that if a human being were placed directly at the top, he or she would not survive for more than two minutes; the temperatures hover around -40 degrees Celsius and hurricane force winds are constantly blowing. “So dangerous, yet so beautiful,” he exclaims, adding that just as the last light of dusk faded away, he knew that he had found his life’s dream—to climb Mt. Everest!

Needless to say, the journey upwards was far from easy. “I tried climbing Everest twice, in 2014 and 2015, but both times, the climb was cancelled due to natural disasters,” says Kuntal. After these failed attempts, many discouraged him saying “The mountain doesn’t want you there” and “You don’t have what it takes,” but Kuntal was determined. “I kept the fire inside me burning and trained harder than ever. My family supported me immensely. I never gave up on my dream and finally made it to the top!” Kuntal learned from this experience that “No matter what people say, you must continue to nurture your dream and protect it like your baby,” adding that there are no shortcuts to the top. Another inspiring lesson that Kuntal learned is to live in the present. “Whether it's running a business or climbing a mountain, we are so focused on getting to the top that we forget to live in the present and enjoy the process of getting there. While aiming for the destination is important because it gives direction to the journey, one must balance it out with enjoying the journey as well.”

Ever since Kuntal began spending more time in the mountains and nature, he observes that he has started enjoying the present and learning from every moment. He goes on to narrate how this attitude was reinforced in him when he escaped sure death in the 2015 avalanche. “That night, when I went to sleep, my entire life played out in front of me. I realized that if one has a dream or passion, the best time to pursue it is now. Not tomorrow or the day after, not in 60 years when one has all the time and money—now!

Many are stumped to discover that Kuntal is a vegan. Considering he pursues such a physically daunting passion and trains really hard for it, most wonder how Kuntal manages to get all his nutrients and energy with a vegan diet.  “I was born and raised a vegetarian. However, it was more about convenience, taste, and above all, apathy towards animal rights. For instance, I would not eat eggs if I had to eat them in a form like an omelette or boiled eggs, but if I had to eat a cake which had used eggs as an ingredient, I would happily eat it.” Kuntal didn’t think much about it until he moved to Los Angeles in 2001 to pursue higher studies. “One of my roommates at university was a vegetarian by choice and exposed me to the horrors of the dairy, poultry, and leather industry. After doing my research, I realised that there is no difference between a glass of milk, a block of paneer or cheese, and a piece of meat. I understood that I could not reconcile my compassionate thoughts with my cruel lifestyle and decided to go vegan.” Kuntal donated his leather and woollen belongings to a homeless person and replaced these with vegan versions. Even the gear he has used so far on his mountaineering expeditions is vegan.

Though adapting to a vegan lifestyle was a bit of a struggle, Kuntal believes it was nothing compared to the struggle that billions of animals, who are exploited and killed, go through. This was the first time in life that Kuntal had taken a strong stand on a major issue, which opened floodgates of change in him. “Going vegan sensitized me, and I was able to get rid of some prejudices like homophobia, racism, and sexism. Those years of introspection were some of the most fruitful years of my life and made me the person I am today.” Kuntal realised that his conversion to veganism had put him at complete ease with himself and made him highly optimistic.

Kuntal has been a vegan for close to 15 years now and says that it’s been an awesome journey. “My nutrition plan, when I’m training, includes whole plant-based, low-fat and high-carb foods. I love eating fruits, vegetables, legumes, grains, nuts and seeds, and this diet has done wonders for me; I recover much quickly from excruciating workouts. On the other hand, when I eat unhealthy food like deep-fried stuff, white refined flour, or white sugar, my recovery is much slower.”

Elaborating on his diet, Kuntal says that a lot depends on where he’s climbing. “If I’m climbing in the Himalayas, then most of the local food tends to be vegetarian, which is akin to my vegan diet: vegetable stews and curries, fruits, lentils, soups, wheat bread and roti, rice, potatoes, pasta, noodles, etc.” Kuntal also carries comfort food from home including a trail mix of dried fruits and nuts, nutrition bars made from dates and nuts, and a few local snacks. Recalling his Everest climb, Kuntal says that he ate pretty much everything from poha, upma, puri bhaji, and parathas to vegan Tibetan bread, pancakes, dal-rice, vegan pasta, burgers, and his favourite dish, pav bhaji. “Our awesome cooks, Ngima Tamang and Anup Rai, even baked us a vegan cake! So, truly speaking, I don’t think I’ve missed out on anything.”

Kuntal quit working nine to five about six years ago but continues to work from home. He devotes a major part of his time to training and truly enjoying life. Sharing the five mantras that he lives by every day, he says, “I am usually up by 4 am and catch a train to the Sahyadri mountains as I prefer to train outdoors surrounded by nature.” Kuntal prefers this to working out in a gym, enclosed within four walls. “I believe that food is fuel and so make it a point to eat clean and avoid preserved food,” he says, adding that it’s important to hydrate as much as possible. “Drink at least two litres of water a day if you lead a sedentary lifestyle; more, if you are active.” Kuntal believes in sleeping well and says that elite athletes sleep for 12 to 14 hours a day to recover from tough training. He advises to get at least seven hours of sleep and not to compromise on this as it helps one live a longer and better life. Lastly, Kuntal highlights that it’s important to keep stress at bay. “Exercise produces endorphins that act as natural painkillers and also improve the ability to sleep, which, in turn, reduces stress,” he says.

Apart from mountain climbing, Kuntal enjoys photography. “One of the biggest reasons I photograph is to share the beauty of our world and inspire people to go experience it for themselves. My hope is that once people experience nature, mountains, and the wilderness, and understand how important they are to our survival—both physical and spiritual—they will automatically become conscious of the everyday choices they make and try to conserve our beautiful planet.”

Kuntal has scaled various peaks including Mt. Lobuche East, 6119 meters (reached the summit on March 26th, 2017), Mt. Chulu Far East, 6050 meters (stopped 50 meters short of summit in Dec 2015), Mt. Elbrus, one of the Seven Summits, Russia, 5621 meters (summit in June 2014), Mt. Chamser Kangri, Ladakh, Himalayas, 6600 meters (summit in Aug 2013) and Mt. Friendship peak, Himachal, Himalayas, (high point of 5050 meters in June 2012; aborted just below summit ridge due to white-out-like conditions). Further, he has accomplished many feats including completing the Everest base camp trek 10 times, being on the first team of the season to cross Bali Pass in May 2011, and making several rock-climbing trips in the Sahyadris. Speaking of future plans, Kuntal hopes to climb a big mountain in 2018 and at the same time, focus on mentoring budding mountain climbers and leading mountaineering expeditions. “I consider the Himalayas as my mentor, friend, well-wisher, and someone I can always count on,” he says. John Muir said, “Going to the mountains is like going home,” and nothing sums up Kuntal’s life, better. “When I am in the Himalayas, I am home!”

To be put in a box

Let all these ingredients soak for about 20 to 30 minutes. Add ice to the mixture and blend it to get a thick smoothie. Kuntal substitutes bananas with different fruits to make his smoothies as adventurous as his mountain climbing. He uses figs, strawberries, or grapes.

Pressure-cook chickpeas. Blend these and all the other ingredients together. Creamy hummus is ready! Kuntal adds flax seeds, paprika flakes, and some oregano or basil to spruce up his hummus.