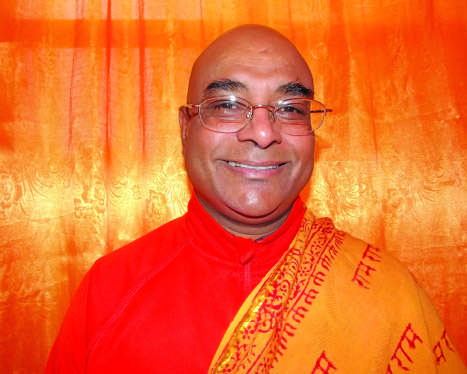 The yogi from Trinidad and Tobago

The yogi from Trinidad and Tobago
Dr. Sant S Dharamananda was born in the beautiful islands of Trinidad and Tobago and migrated to Wisconsin for higher education in 1982. He is a direct disciple of Sri Swami Rama of the Himalayas since 1987.
He has a PhD in Eastern Philosophy with an emphasis on Higher Consciousness, from Williamsburg University in Manchester, England. He has also pursued an MBA degree in Sustainable Community Development and graduated with a BS Degree in Industrial Technology from the University of Wisconsin-Stout. He gives the readers a glimpse of his incredibly profound mystical experiences.

My Gurudev, Sri Swami Rama, is my cell tower to the ‘Divine Inner-net’ which allows me access to communicate with divine love and grace in all things. There is no one moment in my life attributed to that divine awareness and presence. However, in every moment, as I travel through space, time, and causation, I stay present in the NOW, only to find that everything is happening in the microseconds of the NOW. Yesterday is gone and tomorrow will never come, yet many of us build hope upon that false notion of time.

Magical experience in youth
When I was thirteen years old, there was one incident in my life that inspired me to seek deeper and search for the divine potency within me. I was sitting outside on the porch of my father’s house in the islands of Trinidad and Tobago, overlooking the orange orchard with neroli flowers of orange blossoms. It was a windy day during the beginning of the rainy season in a tropical climate. I was casually looking at the blowing wind carrying the neroli petals across the treetops, seeing the white lining of free-flowing white petals across the sugar cane fields and grasslands near my home in the central mountains of Trinidad and Tobago.

At that moment, I closed my eyes and felt drawn inside. As the windy breeze gently touched my face, I asked the question, “Oh Mother of the Wind, I can feel your coolness on my face, and I see you carrying away the white orange blossom neroli petals in your arms across the sugar cane fields and grasslands. But how do I know that you can see me?” I paused my thoughts, breathing gently with no anticipation, not looking for an answer or response of any sort. Just an innocent request.

A few minutes later, I saw the white orange neroli petals drop down vertically, directly in front of me on a different time-bound dimension, as though the wind came to a standstill. On second thought, the wind did come to a standstill, intuitively saying, “I can see you too.” At that moment, an inner realised feeling came to me declaring that the earth, water, fire, air, and space are more alive. My individual mind could not conceive the vastness of the divine potency.

Three levels of satgurus
Since then, I secretly searched for spiritual teachers who could share more with me about the Divine. It was then that I met a Panditji who told me that satgurus are of three levels. The first-level satguru is like a BIRD. The physical contact and heat of the bird, sitting on an egg, causes the egg to break open and hatches the baby chick. This level of satguru blesses by touch. The Guru touches the disciple on the head and changes his or her karmic path thereafter.

The second-level satguru is like a FISH. The fish looks at the eggs and the power of sight helps the fish eggs to transform into tadpoles. This level of satguru looks at the disciple and transfers shakti or divine grace. This gaze allows the intuitive mind of the disciple to expand into the knowing state of awareness. The third-level satguru is like a TURTLE. The turtle buries her eggs in the sandy shore and never sees the hatchlings thereafter. Only her thoughts across thousands of miles in the vast ocean allow the baby turtles to break out of their eggs and start their race of life towards the ocean. This level of satguru does not have to see the disciple, but tracks the disciple from life to life, as though the souls of both, the satguru and disciple, are One.

Guru’s mantras
My Gurudev has known me from a past life, and after meeting him in August 1987, he brought new mysteries in my life. He gave me his shawl as a gift and initiated me with mystical mantras that were over 20,000 years old in the Himalayan Tradition. Swamiji instructed me, “Beta (son), chant these mantras every day for ten years, and you will experience the efficacy of mantra medicine.’ I had practised chanting those mantras every day from August 1987 to November 1996.

Life takes a sudden turn
My Gurudev took Mahasamadhi on November 13, 1996. I had no idea that he had left his body at that time. Two days later, on November 15, 1996, I became paralyzed. It was a snowy day in Minneapolis, and I had gone to pick up my daughter from school. Upon reaching the parking lot, I opened the car door and stepped out. I fell on the snowy ground and heard a loud explosion in my ears.

At that moment, I started hearing sounds of ringing bells and buzzing bees. My sight faded. I had absolutely no idea what was going on with me. I had no sensation from my waist down and felt excruciating pain. I could not walk for nine days. My body and mind were going through different experiences for the first three days. I felt as though Lord Yamraj, the Lord of Death, was lurking around my house and was afraid to sleep for three days. Then I felt like water was bubbling through my spine for days. Some days, I felt like there was a fire burning in my bones; other days, I felt like there was a stormy tornado inside me.

In fear of the unknown occurrences, I took my Master’s shawl and wrapped myself in it. I tried to comfort myself for nine days. One strange night, I saw this small droplet of white liquid light dangling far away in the distance, high above in the sky. Then the small droplet of white liquid light suddenly came down with full force and struck me on the centre of my forehead. The liquid light went down into my spine and came back up to my forehead with a cool sensation, and the pain subsided.

Shortly thereafter, I fell into a very deep state of sleep and saw this fluorescent tubular coloured ring of lights come out of my body and stretch across the sky.

The voice stopped calling me as I arrived at this small grass hut in a hilly remote village, a place that looked familiar. As I entered the hut, I saw this old person with a whitish beard sitting in the dirty porch under the overhanging grass roof. He seemed worried. I touched his head and he looked up. He gazed at me but could not see my astral body. His face looked very familiar.

Miraculous recovery
I left him and went inside the hut. There I saw two young boys lying in separate beds, covered with white sheets. The boys had contracted some fatal disease and one had died. The other boy was in his last few breaths of life. I placed my hands on the dead boy and noticed my hands went through his body. I placed my fingertips in his nostrils, and he started breathing. My fingers were glowing, and then the heart of the boy started glowing. I removed my hands and saw the boy open his eyes. He was slowly breathing on his own thereafter. I put my fingers in the nostrils of the other boy and he started breathing on his own as well. The two boys survived the fatal disease.

As I walked back to the old man, I touched him on his shoulders again, but he could not see me. I looked into his eyes and strangely, I remembered seeing those eyes when he was just a small baby as my grandson in a past life. Apparently, he was looking after his two grandsons who  had contracted a fatal disease that had no cure. The old man had called out to his ancestors for help and that voice had reached me as an ancient name of the Bhardwaj gotra. After the boys were fine, I left and walked around the village before I came back to my physical body. The place was very familiar to me as it was of my past life.

Past life in India
Sixteen years later, I went to India in 2012 for the marriage of my eldest daughter, in the city of Satara in Maharashtra, India. To my surprise, I found nearby, the village which I visited in my astral body in 1996. I visited the village and found many things that I had seen in a past life.

I had many more such experiences with my Gurudev and other mystic swamis, that are documented in my book, Mystic Experiences with Himalayan Masters, which was published in India by Life Positive in 2016. I am currently in the process of writing another book entitled Transformation—A Journey through Space, Time and Causation.