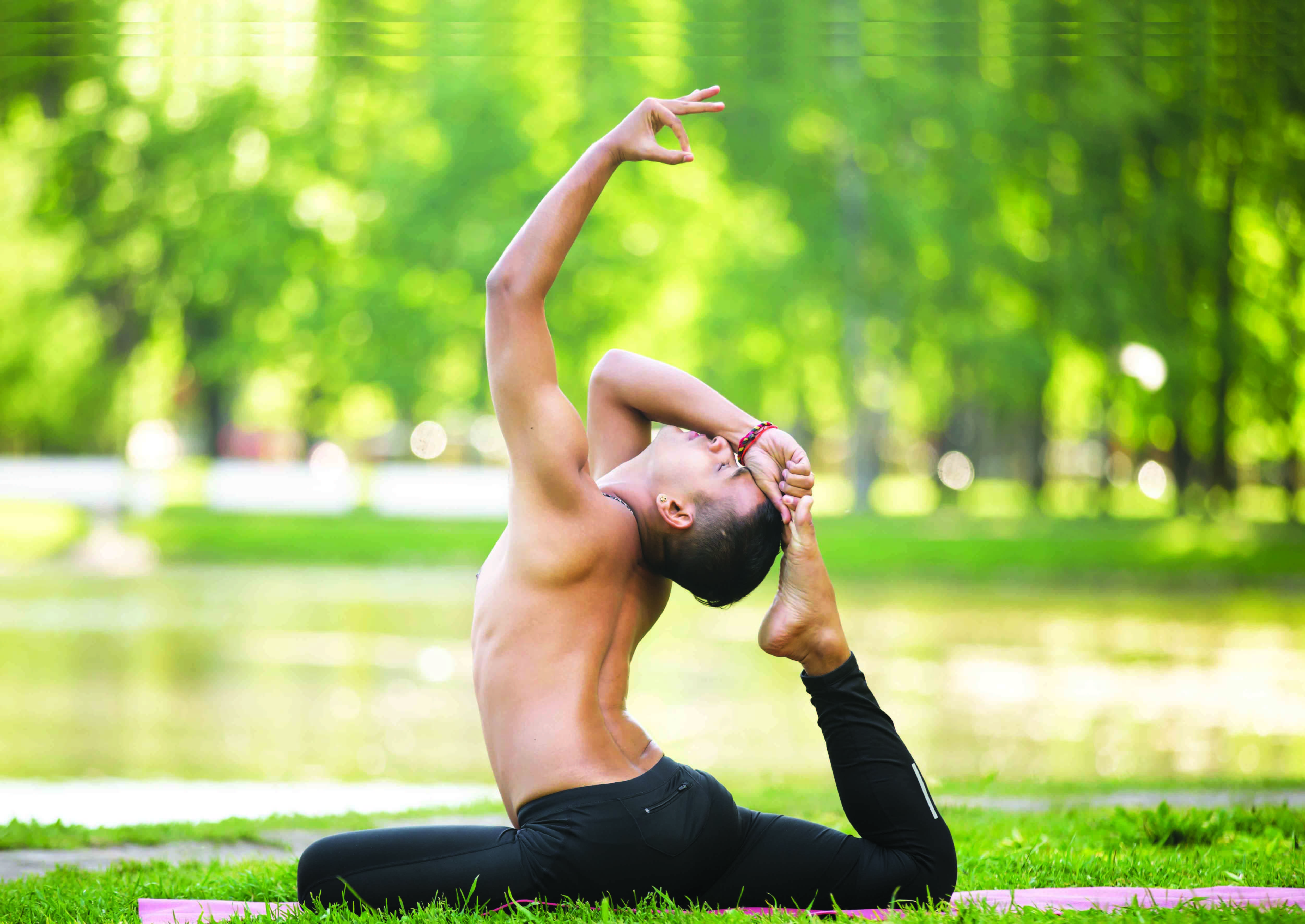 Hatha yoga is more effective in unblocking prana than regular exercises as it works at a subtler level by balancing your nadis, says Charles Shahar, a yoga teacher on International Yoga Day

It is instructive to recognise how much tension our bodies hang on to when we experience stress in our daily lives. For instance, we may be so tight around the shoulders or neck that it will feel almost like we are wearing a suit of armour. Pressing or gently pinching these muscles will feel painful. Such tensions can occur anywhere in the body, from head to toe, but tight muscles are only the most superficial level of blockage related to stress. Constriction occurs not only at the level of the physical body but in the subtle body as well. Tensions can block the vital energy or prana.

Yogis describe subtle nerve channels or nadis that criss-cross the body and maintain the flow of vital fluid throughout the organism. There are tens of thousands of these nerve currents. When these channels get blocked or become constricted, prana is impeded or prevented from freely circulating. Aside from simple muscular tension, all major health issues related to common diseases have at their root, disturbances in the pranic sheath, the subtle body that animates and underpins the physical organism, what the Hindu scriptures call the pranamaya kosha.

First, let's look specifically at muscular tension due to stress since this is the most obvious manifestation of blocked prana. There are many ways to free the vital energy that gets stuck in the pranic sheath, but some methods are more effective than others. I will make two assumptions in the following analysis: that I am speaking to readers who lead a more refined or spiritual lifestyle, or at least are interested in doing so; and that they are also more refined in their sensibilities, for example, by avoiding extremes in environments or people.

Any physical movement, including exercises such as vigorous walking, jogging, swimming, and so on, will have the effect of liberating some of the vital energy that gets bound in areas of tension. This is why people often feel refreshed after such activities. They seem to have more physical energy and exuberance. Interestingly, exercise is a completely haphazard way of releasing prana, simply because it does not take into account what is happening on a subtler energy level. Moreover, although exercise will release prana, it may also deplete one’s vital store if taken too far.

Intensive aerobic exercises, like the classes offered at any local gym, certainly have the effect of liberating prana, but they also have other consequences that a more refined sensibility may find undesirable. If you are used to gentler activities, certain types of frenetic, high-impact exercises have a jarring effect on the subtle body. From an esoteric point of view, the consciousness becomes more body and sense oriented. The loud music and bright lights add to the harshness of the experience. This might not mean much to someone who is not practising a spiritual lifestyle, but for a refined soul, such an atmosphere will make them nervous or unsettled.

Activities such as intensive body-building can likewise be detrimental from a pranic perspective. The muscles are trained to remain tense, creating further pranic knotting. On the other hand, anything that keeps the physical body flexible will maintain fluidity of prana. To this end, stretching exercises are important, particularly before any rigorous exercise. Swimming is also beneficial, and many people forget that brisk walking is a fine way to keep fit.

Joggers often say that there is a point in their activity when they reach a mindless and euphoric state. Brain chemicals aside, on a subtler level, energy is getting liberated in the vital nerve currents. Not only that, but the kundalini energy, or life force, described by the yogis, rises up the spine, hitting subtle channels which trigger a high. No wonder people get addicted! However, this high soon dissipates and no expansion of consciousness takes place, as happens when the kundalini rises during meditation.

In general, athletes are a healthier group than the overall population. Their auras are brighter and they certainly have physical vigour and stamina. But it is instructive to note that like most people, they have pranic blockages and areas of physical tension, and of course, certain mental and emotional factors also play a part. Therefore, exercises, while effective in unblocking some pranic knots, are not the last word on the subject, although their benefit is certainly important in terms of keeping the body toned and fit.

How blockages get built

In my experience of teaching yoga over many years, I was sometimes amazed to see how stiff participants were. Some were in good shape, had great muscle definition, yet they struggled to follow the class. I was many years older than most of them but more supple. I also taught yoga to nursery school children and noted that not all were necessarily flexible. So it is clear that pranic blocking can happen at any age; and physical exercise, although having certain advantages, is not necessarily the most efficient way of promoting pranic circulation in the body.

For the person who sits at the job all day and is exposed to high levels of stress, the cumulative effects of tension can be devastating. Some type of physical activity, even regularly going out for short walks or doing small stretching routines, is important for getting prana circulating again. I am thinking particularly of people who use computers a lot and build up a certain amount of frustration, without the possibility of release. There is tremendous pranic clogging in their systems, which may manifest anywhere in the body, not just in the neck, shoulders, or back.

Physical movement is important for freeing up prana. The activity shifts the energy so that it does not become stuck or stagnant. This is why active people tend to be more replete with prana than inactive people. An athlete will have more vitality than a desk clerk because sedentary work can result in much blocked energy. However, as I implied, physical movement is not nearly sufficient for maximizing pranic circulation. If this was the case, active people would have perfectly healthy systems, free from nervous tension. I am talking about a much more subtle energy here, which is connected to spiritual development and not merely to physical activity.

Perhaps the most sophisticated system for unblocking prana was developed by the ancient yogis. Hatha yoga involves a series of postures which are specifically designed to release the subtle energy currents. Each posture targets specific areas and releases pranic knots that get built up in the body. Hatha yoga represents a holistic approach for promoting balance and wellness, and its benefits extend well beyond the physical level. I am always amazed at how people look after they experience a yoga class. They seem to emanate a sheen, a soft light. The subtle body has become so expanded and energised that this is visible even with physical sight.

Contrary to what some Western practitioners believe, Hatha yoga is not just a way of achieving physical relaxation and flexibility. Every posture is an exercise in concentration, a focussing of prana or energy. Hatha yoga itself is ultimately a technique to promote meditation and to help the mind achieve shanti or inner peace. The ancient yogis realised long ago that the body temple needs to be purified if the mind is to reach a state of transcendence. Unblocking prana means unblocking the mind; the two are inseparable realities.

The two nadis and peak experience

What do I mean by that? The yogis distinguished between two major nadis, or subtle nerve channels: the Ida and the Pingala. In the ancient yogic texts, they are referred to as chandra-nadi or the channel of the moon, and surya-nadi or the solar channel, respectively. They have an opposite effect on the organism. The flow of prana through the Pingala is activating, whereas that through the Ida can be thought of as a dampening force. Through certain breathing exercises or pranayama, we can balance these two fundamental currents of prana. Alternate nostril breathing, for instance, is highly effective in reaching this equilibrium.

When an optimal state of balance is attained, the mind becomes suspended, and the thoughts recede into the background of one’s attention. This is the first stage of deep meditation, when the mind enters into a calm, yet highly aware state. One experiences a profound lucidity in such moments. Note that this state is very unlike sleep, in which the Ida nadi is dominant. It is also not at all like the typical waking state, throughout which, under the influence of the Pingala nadi, the mind remains restless and fidgety.

When the flows of the Ida and Pingala are perfectly balanced, the kundalini energy, which was previously lying dormant and coiled at the base of the spine, is aroused. As the kundalini energy gets opened, its ascent begins up the spinal pranic channel or Sushumna, the third major nadi, described in the yogic texts. As it rises, it pierces the chakras or energy centres, each of which represent a different loka or plane of awareness. When the kundalini finally blows through the seventh chakra or Sahasrara, the consciousness transcends space and time, and the sense of individuality dissolves.

This type of peak experience cannot be attained simply by engaging in physical activities, and it goes far beyond the question of freeing the body from physical tension. Although people do get high at times performing exercises such as jogging—and this might be due to a certain "kundalini rush"—it is still tied to the pleasure centres of the lower chakras. It does not nearly approach the transcendental experience that deep meditation can provide. The more that yoga and pranayama are practised, the more purified the subtle nerve channels become and the deeper the meditative states attained.