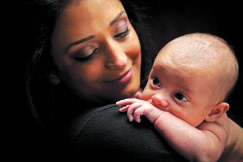 When angels sing
Vidya Murlidhar, a former agnostic, narrates her story of how Life led her to believe in the benevolence of a higher power

I grew up an anxiety-riddled teenager—an agnostic, sceptical of the ways of man and his God. What was this world He had created where despair flourished, where tyranny prevailed, and none felt safe? It was Hell on Earth. Yet, wherever I looked, devotees thronged in thousands to places of worship to sing His praises and to hate a fellowman who followed a different path, even ready to take away life in His name. It baffled me.

Does He exist?
Hypocrisy seemed rampant all around. A pandit (Hindu scholar or priest) who chanted not for the well-being of common man but for money. A ripe old man who claimed to have mastered the religious texts yet treated his daughter-in-law with disrespect. A business tycoon who bowed in all humility in front of the elephant-headed God but did nothing for the scores of poverty-stricken people around him. A priest who abused children. How was it that every one of these men, flawed in their character, thrived? If there was a God, wouldn’t the world be a better place? He didn’t exist, I decided. And, it was up to me to take care of my loved ones too. I had to save the world doing the best I could.

And so, it happened that I blossomed into a constant worrier. I fretted about the big stuff and the little stuff. An impending exam, my parents’ health, a lost pen, an upcoming stage performance, a late train, the Mumbai rains, a stray dog, in short— everything. My mind often played ‘What will happen if’ scenarios with their worst possible outcomes. I felt the weight of the world on my frail, young shoulders.

During such times, I envied my mother. She was a staunch devotee of Lord Ganesha and her faith was unwavering. Leave your troubles to Him, she advised. But I couldn’t. How could I hand over my life to someone who didn’t exist?

A comforting sign
So, I chose not to believe and continued to worry—until one night, I awoke from a deep slumber, troubled.

I was twenty years old and was coming to terms with the sudden tragic death of a few dear ones. Two of my best friends had lost their fathers within the span of a month. Nervous for them and their future, and pondering over the fate of my own parents, I often went to bed afraid. That night, when my eyes jerked open, my mind swirled with deep questions. Why did good people die early? What had my friends done to deserve this? How was it that nasty old Mr Varma was still alive and two wonderful people, pillars of their family, were snatched away?

Full of angst, I questioned, “Well, God, if you do exist, give me an answer. Why?”

And, in that instant, something shifted. I wish I could tell you that I heard a divine voice, or, like Abou Ben Adhem, experienced a vision bathed in yellow light. There was none of that. What I did feel though was a sense of calm. A feeling that all would be well. I went back to sleep, not knowing what had transpired.

As I dwelled on the experience the next morning, a tiny thought sprouted in my mind. It was unquestionable that a warmth had enveloped me at night. What was that? Was that a response from . . . God?

Nah . . . couldn’t be. There was much too much wrong going on in the world for that to be right.

Bad times for baby
Years passed. I followed the normal trajectory that most people do. I graduated, got married, had a baby, and continued to worry. After all, I now had a beautiful girl to protect too. The first year of motherhood was exhausting. My baby had severe colic, barely ate solid food, and rarely slept more than four hours at a stretch. She sometimes winced as if in pain, but frequent visits to the doctor revealed nothing. She cooed, gurgled, and smiled in my arms and reached her milestones on time. There was no cause for concern, doctors stated. It was a phase and would pass.

Then, one evening, just four days shy of her first birthday, she cried uncontrollably. We rushed her to the urgent care clinic, where X-rays showed a huge, dark patch on her right lung. It was serious, and further tests needed to be done to diagnose the condition. A series of procedures performed on her eventually confirmed that she had a hole in her diaphragm through which her liver and intestines had pushed upwards through the abdominal cavity, causing her right lung to collapse. My baby would have to be operated upon as soon as possible. Unfortunately, the surgeon was not confident of performing this surgery he deemed ‘extremely complicated’ and suggested that we move her downtown to a speciality children’s hospital. But there were no beds available there immediately, so we would have to stay in the current facility until something could be arranged.

By now, it had almost been a day since we had visited the urgent care clinic. My daughter had not been allowed to eat or drink anything. The nurses struggled to calm her down as she kicked and wailed. They gave her medication to get her to sleep but it had the reverse effect. It made her extremely excitable. As a mother watching her writhe in pain, while the nurses held her arms tight to find an IV vein, I felt an agonising helplessness come over me.

‘Sing to her, sing to her—NOW’ I heard a voice suggest to me from within. The command was urgent and clear.

I felt a tremendous strength fill me as I pushed away the nurses’ arms, grabbed my baby from them, and cradled her in mine. Fighting back tears, I sang her favourite song:

Swim so wild and you swim so free.

Heaven above and the sea below

A little white whale on the go

I crooned as if there were no tomorrow. Within seconds, my daughter calmed down, enabling the nurses to hook her up to the IV. I continued to sing to her that night, every children’s song I knew. As my voice filled the room and the corridors of the hospital, nurses, relatives of patients, and even the doctor came up to me.

“What a beautiful voice!”

“Do you sing professionally?” they asked.

It surprised me. Even though I had hailed from a family of singers, the singing gene had escaped me. Until then, I had never been able to carry a single tune, ever. There was a time, in third grade, when I had sung to a group of kids who were frank enough to tell me to stop. Yet, somehow, that night and in the days that followed, it was my singing that helped my daughter overcome the ordeal of the next few days. For the next several days, barring the time that she was in surgery, I sang to her day in and day out. It was the only thing that gave her comfort. I hardly ate or slept, yet I had the energy to sing tirelessly. Fortunately, the surgery was a success and my daughter began her slow journey to recovery. (As for me, I have made several attempts to sing publicly since, but they have only backfired, relegating me back to being the bathroom singer I once was.)

“You are a brave mama,” everyone said to me at the hospital and in the days after. In my heart, though, I knew that it wasn’t me. There was a power beyond me that had carried me through. A power that permeated my being when I had needed it the most. Though, I struggled to call it God then, I was certain that when I had asked for help, it had arrived in the form of a voice that was an anchor for my daughter.

The faith deepens
That was just the beginning of my tryst with faith. The years that followed brought with it some intense moments that only strengthened my belief in this power. Once, in Chicago, when my parents were visiting us from Mumbai, my mom had to be admitted in the emergency with classic symptoms of a cardiac attack. The angiogram revealed several blockages, two of which were 99 per cent. The surgeon placed a stent in one of them, but the second blockage was tricky to operate upon and would require a surgeon with greater expertise. So, she was moved to another hospital. My husband was away in India at the time as we were getting ready to move there in a couple of months. Our house was scheduled to go on the market in a couple of weeks and was being carpeted and painted. With the stress of the impending move and my mother’s condition, I briefly felt my life cave in. This time around, I fearlessly demanded help from God. And once again, I was filled with a certainty in my heart that all would be well, and we would get through it. Over the next three days, a highly skilled surgeon successfully performed the angioplasty on my mom. She bounced back to good health in time for us to make the move.

By now, I had no doubt that if I asked, I would receive. But who was the bestower was the question. Was it just an all-knowing form that was concentrated in an idol? I was not convinced of this because each time I had asked, they had been pleas for help to no one form in particular. Yet, I had been touched by grace. What was that warmth that comforted me, that held me afloat during arduous times? Was it Ganesha, Hanuman, Mother Mary, or Archangel Michael? Who was it?

Spiritual search paves the way
Thus began my quest for God. I devoured books on spirituality, scoured the Internet, and listened to podcasts of the New Age gurus in search of answers. I learned that they all carried the same message: an omniscient, boundless energy pervaded the entire Universe and pulsated through our very bodies; a circulating life force that I could access when I sat in stillness. Fascinated and curious, I plunged deeper into these studies. I learned Reiki and meditation. I pondered over desire and destiny. The greatest clarity, though, came from life’s experiences.

Life has a funny way of answering your questions. Over the next few years, she sent many more curveballs our way. Gruelling moves, financial setbacks, health challenges, and stagnating careers, some of which are still unresolved. Oftentimes, I felt every day was a battle, and some days, I still do. Yet, sitting in stillness helped me understand that whatever happens, happens for the best. Delving deep into finding the meaning and purpose of life gives me hope that within every hurdle lies a lesson which will only make me stronger.

There are many questions that baffle me even today. I don’t understand why good people die untimely deaths or why malicious men are at the helm of power. My own life is far from perfect, yet I have never been happier. I am no longer afraid of what the future will bring because I believe that the bruises and scars that mar me today are preparing me for something bigger. Call it prana, qi, chi, or God, this loving energy with its infinite wisdom engulfs me and it will, if I allow it to, unfold a miraculous path before me.