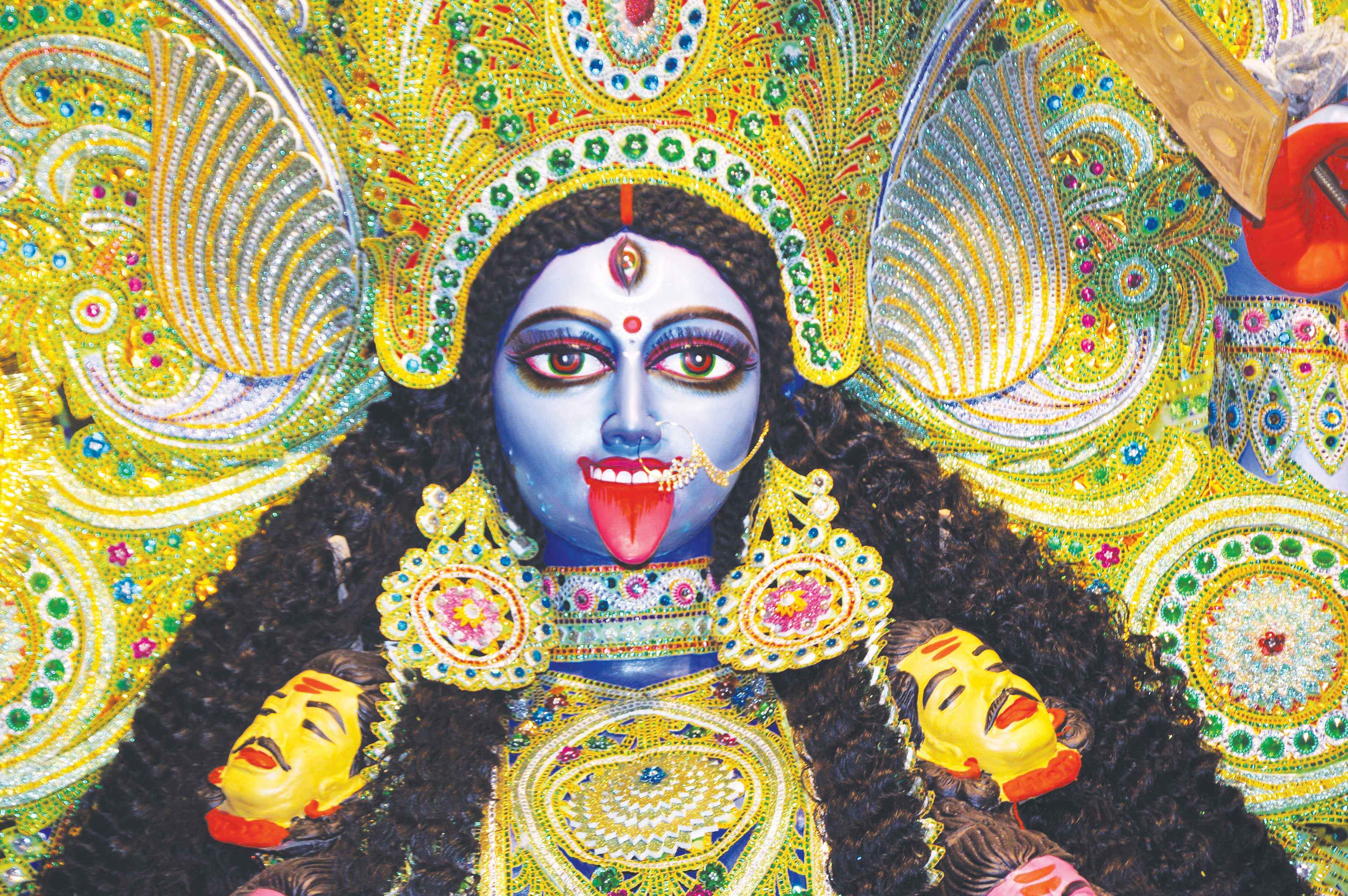 When the Goddess beckons

Ketaki Jayakar, a follower of Paramhansa Yogananda, shares her experience of solitarily exploring Calcutta, the abode of her guru and home to some of the most well-known temples

I read Autobiography of a Yogi by Paramhansa Yogananda for the first time, 20 years ago. I was so overwhelmed by it that I made it the Bible of my life, reading it repeatedly. The author’s vivid description of Calcutta, painted in my mind’s eye, a picture of Dakshineshwar, Kalighat, Serampore, Garpar Road, and many other places in the city.

Needless to say, I follow the teachings of Paramhansa Yogananda till today and have taken his kriya yoga diksha. I have visited the ashram at Ranchi but have not had the good fortune of visiting the ashram at Dakshineshwar. This year, my Bengali friend invited me to visit Calcutta, especially Dakshineshwar, since her parents have a three-storey house there, a stone’s throw from the ashram. My joy knew no bounds when I found out that she had booked me in the ashram for three days and the rest of my stay would be with her parents. I was all geared up to visit the city of my joy; the city where my Master grew up, took the most rigorous training from a very strict but benevolent guru, meditated endlessly, and was blessed with the divine vision of Goddess Kali in the precincts of the Dakshineshwar temple.

Unfortunately, just two days before leaving for Calcutta, my friend rang me up and apologised profusely, expressing her inability to accompany me due to an emergency. I could not cancel my programme at such short notice, so I requested her to get me an extension of stay at the ashram, which she willingly did. She also arranged for a car to pick me up from the airport and take me to the ashram. In one’s spiritual quest, one must travel alone; ekla chalo re (walk alone). I had only five days in Calcutta and decided to make the most of it.

The day I landed, I first visited Dakshineshwar. The ashram’s gates open to a divine world. Sprawling across a wide area, overlooking the Ganges, the main building is a grand, old haveli, probably owned by a Bengali zamindar. It has a huge hall with pillars and two upper floors. The parlour behind the pillared hall is used for meditation. One can see the Ganges flowing gently, with big sailboats silently gliding past, from the pillared hall. It is indeed a scene from the Bollywood film Amar Prem.

The trees in the garden bow down with the weight of their flowers, spreading fragrance with the cool breeze—mogra, champa, naag champa, bakul; the fragrances vie with each other to soothe the senses. At the corner of the garden is a small temple-like pavilion where you can sit and meditate whilst concentrating on the sound of the waves lapping the compound wall of the ashram. The living quarters, office, reading room, and dining hall are all up to international standards. The vegetarian food served is tastier than anything I’ve eaten at a top-class restaurant. In the centre of the ashram is a lovely lotus pond, surrounded by huge trees. The whole atmosphere is so serene that you can actually feel your body, mind, and soul recharging.

When I went to Dakshineshwar temple, I discovered that the queue was longer than the one you’d usually find outside Siddhivinayak temple, but I was determined to have a darshan  of the Divine Mother, who had blessed my Master in a vision. I stood in the scorching afternoon heat—barefoot, waiting for the temple doors to open, as the queue inched forward. Suddenly, a priest came out of the temple and beckoned me to enter through the side entrance. No money was demanded for this favour. I went inside and stood in front of Kali of Dakshineshwar, the black idol with big eyes and a red protruding tongue. I was stunned into silence. I had made a long list of favours to ask but seeing her with my own eyes at such close quarters was so overwhelming that I just stood there, taking it all in. I humbly thanked my Master for this experience.

The Dakshineshwar temple is a huge precinct with a cluster of other smaller temples. Beyond the temple flows the Ganges. There is a small ghat (a set of steps leading down to a river) outside the temple from where boats ply across to Belur Math, home to the headquarters of the Ramakrishna Math and Mission. I sat in a small boat, a lonely traveller amidst unknown faces. The journey in the boat was idyllic, with the Ganges gently spraying me with her sacred waters. It took about half an hour to cross over.

The next morning, I took a taxi to the very ancient Shiva temple of Tarakeshwar, which is about 57 kms from the ashram. The road leading to Tarakeshwar is lined with huge trees on both sides, bordering huge green fields growing potatoes and other vegetables. There are small ponds all along the road, providing fish to the locals. The tranquility all around, an abundance of crops and flowers, and the cool breeze, brought to my mind the verses of Vande Mataram by Bankim Chandra Chatterjee. There was music everywhere, in the rustling of the trees, in the chirping of the birds, in the waters flowing by, and even in the croaking of the frogs. I think luminaries of the likes of S D Burman, Hemant Kumar, Juthika Roy, Geeta Dutt, and visionaries like Sri Aurobindo Ghose, Raja Ram Mohan Roy, Rabindranath Tagore, as well as my Master Paramhansa Yogananda, had a common ingredient for success—the artistic bent of a Bengali.

Tarakeshwar Temple is an ancient temple with the Shiv Linga looking more like a round hat box. There is a small pond outside the temple where people bathe before entering. I too dipped my feet in it before entering for darshan. However, it was too dark in the garbha (inner sanctum of a temple) to see anything. My Master never paid obeisance at this temple as he believed the Divine is within us, and so, there is no need to venerate external forms of divinity. Eventually, his journey became too tedious for him to complete on his own. Fortunately he met a noble soul who helped him realise that it was his inflated ego that wasn’t allowing him to see the Divinity within him as the same that appeared without; that each seeker on the spiritual path felt that his was the only correct path to God-realisation. When he realised his mistake, he returned to Tarakeshwar and did sashtang namaskar (full-body prostration) before the Shiv Linga, after which he got the Cosmic darshan—he has mentioned this in his autobiography.

I had come so far to see the temple but was not satisfied with the darshan which was a mere groping of the Shiv Linga in the dark. I decided to do a second round. Suddenly, there appeared a bright light in the garbha griha and I finally saw the Shiv Linga in all its glory.  Before I could click a photograph, it was dark again. I believe that my Master had taken good care to arrange that brief moment of light for me.

From there I traveled to Serampore, to the ashram of my Master’s guru, Sri Yukteshwar Giri. This was the place where my Master had been trained for his role in America. This was the place where both guru and shishya had performed great austerities and had been blessed with the vision of the Divine Mother. I met an aged devotee there who told me that this was indeed a power spot full of strong vibrations. I am so grateful to have experienced the vibrations of that ashram. I remember just sitting there and taking in the energy of the ongoing spiritual activities.

My next halt was at Master Paramhansa Yogananda’s residence at Garpar Road, in Maniktala. Master’s family still resides there and receives visitors who come on this pilgrimage to see the home. I saw every room described by him in his autobiography; I saw the bedroom where he was blessed with the vision of the Divine Mother, the same room where Mahavatar Babaji came to bless him before he left for America. Then, I saw the little attic that has also been vividly described in the book. I had carried mangoes as an offering since I knew that Master loved mangoes. I left them in front of his photograph in the attic.

The peacefully divine atmosphere of the bedroom and attic beckoned me to sit and meditate, and I did. I was travelling alone and felt free to spend as much time as I wished in the room. Visiting Master’s home and prostrating myself before his spiritual presence in the attic and bedroom has been my heart’s deepest desire. I couldn’t ask for anything more, now that I have been blessed to have this wish fulfilled.