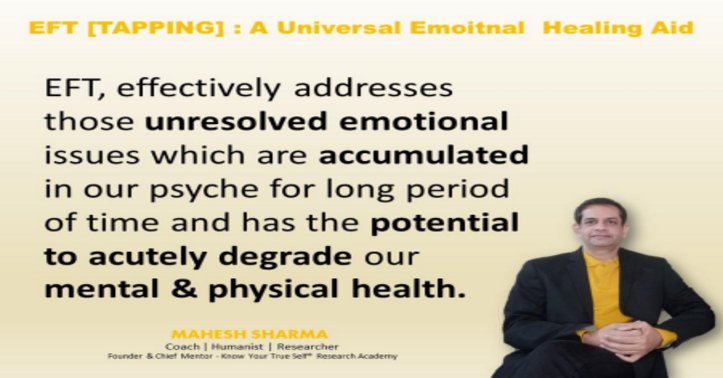 Why EFT is a Paradigm Shift in How We See and Deal with Negative Unresolved Emotions?

It was 2007 and one of my very close friends called me and said to me that I have come across something which deals specifically with emotions, and I think you will like it. As this friend knows that I was researching in the fields of energy, behaviour, emotions, and psychology for the last 5 or more years and we generally had discussions over these healing methodologies, so he recommended as he came across something which deals with emotions.

And it was like I found the missing link that I was searching for for so long. There is one methodology that is still in its infancy but deals specifically with emotions, the subject which is mostly ignored or avoided by most of the other modalities.

Emotions play a very vital role in our emotional, mental, and physical health and well-being.

Though emotions are an integral part of us human beings, they are generally being avoided and ignored for various reasons from the beginning of our lives. Emotions are generally seen as weakness and not as a strength and the proof of this is the language and words, we use to define emotions.

“We should not take emotional decisions.”

“Don’t be so soft and emotional. It will make you weak.”

And when we see emotions as the weakness we tend to ignore and avoid them as much as we can. And this becomes a too deep cause of our depreciated physical, mental, and emotional health.

If we want to give these emotions which we ignore, avoid, and even suppress a name, we can call them Negative Unresolved Emotions. The NUEs.

The NUEs have a far greater negative impact on our health and well-being than we can think of. They can impact our mental health and keep us at a sub-optimal level, as far as our potential and performance are concerned. They can make us more emotionally vulnerable and can lead to depression and acute anxiety. And even if they are not taken care of earlier, they can make us sick. Very sick.

The impact of NUEs on our physical health is not a mystery anymore and still, a greater amount of research is going on in this field.

EFT is one of those methodologies which effectively deal with NUEs and help us remove them in a simple, fast, and effective way.

EFT is a part of a bigger and newer segment of psychology, called Energy Psychology, and has been seen to work very effectively on not only mental and emotional issues but also physical diseases and pain management.

The foundation of EFT

EFT is having its roots in the well-established Chinese energy healing methodology of acupuncture, which was found around 5000 years back and still is being used as a very effective way to deal with physical issues.

The methodology of acupuncture is based on the that we have energy pathways in our body that carries the life energy to every part of our body. And if the energy is flowing in our body in a well-balanced way we are feeling and having good mental, emotional and physical health but if the energy is blocked in our body somewhere, it will create a problem.

If we can somehow balance our body’s energy by accessing and influencing it, this will result in greater balance in the energy in our body and result influence our mental and physical well-being.

EFT is a predecessor of the method called TFT, Thought Field Therapy, which uses the acupoints – the subtle point on the surface of our body that is very sensitive and can be used for accessing and manipulating our body’s energy without the use of needles. EFT uses the acupoint by tapping on them with fingertips.

It is found out that tapping on those acupoints with fingertips, while remembering the negative event, can have a profound impact on balancing our body’s energy.

EFT is a simple, effective and result oriented method to deal with our NUEs, which generally results in having balanced energy in our body, lower levels of stress and anxiety, more clarity and better physical health.

For the past 13 years, I have been conducting the workshop, seminars, and personal sessions to spread the awareness of mental and emotional wellbeing through EFT workshops named as – Develop Emotional Resilience. In the workshop, I help participants not only understanding this revolutionary self-administered method but also apply them in their daily lives to experience a better mental, emotional, and physical health state.

MEHAC – Mental and Emotional Health Awareness Campaign was launched in 2008 with the core focus on spreading the knowledge, awareness and information not only about taking care of our emotional health but keep it our priority.

If you are suffering from any long-term illness, not in an optimum mental state or not finding yourself emotionally health and well-balanced, I invite you to investigate EFT and energy psychology in more depth. Be a part of the next workshop and one-month process and experience the world of energy and emotions uniquely.